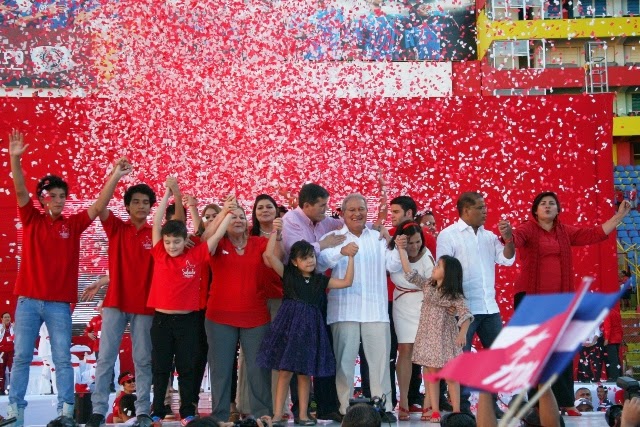 It is almost 34 years since Padre Oscar Romero of El Salvador sent a letter to the US president Jimmy Carter begging him not to fund the military junta that would surely result in the unprecedented killing of innocent civilians. Padre Oscar wasn’t wrong, he was assassinated 2 weeks later (24th of March, 1980) and a relentless killing spree which started on the 7th of March, 1980 ensued, resulting in over 10,000 dead in 12 years. The US had seen the uprising of ‘popular organizations’ and had, of course, sought to ‘free’ the Salvadorian people.
The Frente Farabundo Martí para la Liberación Nacional (FMLN), the former guerrilla group that formed in the 1980s when the US  first began funding the right wing “counter-insurgency” ARENA group (which is STILL the right wing opposition today!) was the only group stood in the way of the US and ‘freedom’. Of course the FMLN was the group who began these ‘popular organizations’ and 34 years later it still holds its original values of trying to end poverty; end social repression; develop an economy based around the needs of the people and introduce politics representative to all, the only that’s changed is that it is now, for the second term, the democratically elected party representing the needs of the people.

That being said, US 'freedom' still has left its mark on the Salvadorian people. About one third of the population (6 million) live in poverty, 78 out of every 100 children make up this overall percentage and about 28% of these children live in extreme poverty. The remnants of those US trained brutal death squads which terrorised the lives of millions through sadistic, macabre, satanic style butchery and repression has resulted in some of the most dangerous criminal gangs in the world like MS13 and Barrio 18, who together with some questionable factions of the US funded, right wing ARENA party, still play a majority part in most criminal activities in the country. However, the future does look brighter for El Salvador.

The last 5 years also saw the FMLN implement a number of social programs including a National Literacy Program, ‘Glass of Milk Before School’ program, Community Health Teams and Ciudad Mujer which sought to better the conditions of trans-gender women in the region, providing them with all the necessary services to lead fuller lives in the country. This time around, the newly elected Salvador Sanchez Cerén developed a government a plan through popular mass consensus which included home visits, mass surveys and opinion polls to try and incorporate the greatest number possible.

His victory came in the second round of elections following what many claim as the most transparent and fair elections in the history of the country. There were observatory volunteers from every party at every table, disputes were dealt with on the spot by party members and the votes were counted in the open. The accessibility was greatly increased and greatly aided by a fleet of boy scouts who even carried some of those who weren’t able to walk to the polling station. This attempt at real and social democracy represents a huge effort that has not backed down in over 30 years.

At MJD we fully support the work of those in our continent actively engaging our people to try and regain some of those voices lost since that first attack on march 7th in Rio Sumpul. We support Sanchez Cerén and so should you, because he represents your brothers and sisters and his struggle is your struggle, your victories are their's. Indeed, all we have to hope for now is that the US doesn’t try and spread ‘freedom’ in El Salvador once again so that our people of Cuscatlan, as it was originally known, can live happier, more peaceful and better lives.


Sebastian Ordoñez
Posted by Movimiento Jaguar Despierto at 4:23 AM