Below is the letter handed to Investec at their offices in the City of London: 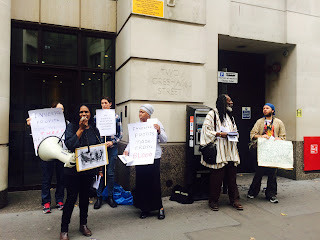 MARIKANA MINERS SOLIDARITY CAMPAIGN(UK)
WE DEMAND CORPORATE ACCOUNTABILITY WITH RESPECT TO THE MARIKANA MASSACRE
Dear Investec,
According to LONMIN’s 2014 annual report your branch Investec Asset Management holds a 5.16% holding and is listed as a major shareholder in the company.
As you will know LONMIN was a principal actor in the Marikana Massacre on 16th August 2012 where 34 of its employees were shot dead and 78 injured by the police, and in an operation that took place with the cooperation and at the prompting of the company.
Even the Farlam Commission, whose failure to recommend criminal prosecutions has been met with dismay by the victims’ families and international public outrage, recognises the contributory responsibility of LONMIN. The families have this week initiated legal proceedings in South Africa for compensation from the state authorities.
But who will hold LONMIN to account? As a major shareholder and hence beneficiary of LONMIN, Investec should examine its own corporate responsibility in this matter.
We demand that Investec publicly states its commitment and uses its shareholder voting rights to ensure that LONMIN:
• APOLOGISES TO AND COMPENSATE THE FAMILIES OF THE KILLED MINERS, the current arrangements are derisory
• PAYS THE MINEWORKERS A LIVING WAGE, which according to repeated public demonstrations by the workers themselves and their trade unions AMCU and NUM is 12,500 Rand per month
• IMPLEMENTS THE PROMISES ON HOUSING, minimally that were made to the World Bank, whereas only 3 out of the promised 5,500 houses dwellings have actually been built
• STOPS AVOIDING CORPORATION TAX , according to well researched reports the company operates transfer pricing mechanism with an ostensible ‘third party’ company in Bermuda to avoid full corporation tax in South Africa.
All these points should already have been resolved by a socially responsible corporation. We urge you to pressurise LONMIN immediately on these points and to inform the victims’ families and the workers’ trade unions of your position.
Yours faithfully
Andy Higginbottom, Cecil Gutzmore
Pp MARIKANA MINERS SOLIDARITY CAMPAIGN(UK), 365 Brixton Road, London, SW9 7DA
14th August 2015
To Investec Group
2 Gresham Street
London EC2V 7QP

Part of a series of events commemorating the lives and valiant struggle of South Afrikan workers shot down 3 years ago, sunday, at the Marakana base of British Owned Lonmin! For a full list of events please visit:
Facebook Events Page